New Rochelle's waters demonstrate many of the issues common to suburban New York waters.  Here history, nature and the demands of a large population collide.  Access to the water is sparse and difficult or impossible for non-residents.  Even residents must pay fees and obtain permits.  Once on the water, places to land and rest are also few and far between.

PUT-IN:  Glen Island Park has an excellent ramp for putting-in boats, however it is NOT FREE and is not available to non-residents of Westchester County.  A Westchester County Park Pass (ie a RESIDENT'S PERMIT) is required to access the Park during most times of the year (I do not live in Westchester County, but I sometimes luck

Created in 1879, this historic park was once home to a zoo and the famous big-band era "Glen Island Casino," where Glenn Miller played.  Today it's the second-most used park in the Westchester County system (apart from Playland).

New Rochelle has several islands in the Sound.  They are interesting to paddle around, but you may not land on any of them.  David's Island, the largest of the group, is an old military base.  Access is restricted and police actively supervise the area.  The smaller islands in the New Rochelle area waters include Huckleberry Island (owned by the New York Athletic Club, which has a large facility on the shore near here), Pea Island (owned by the Huguenot Yacht Club), and many smaller rocks and islands.  Huckleberry Island is the largest.  It is undeveloped at present, though plans by the New York Athletic Club are in the works, and is considered a key habitat for herons, egrets and other birds.  To the southeast, the large island in the distance is Hart Island, home to New York City's Potter's Field.  Th 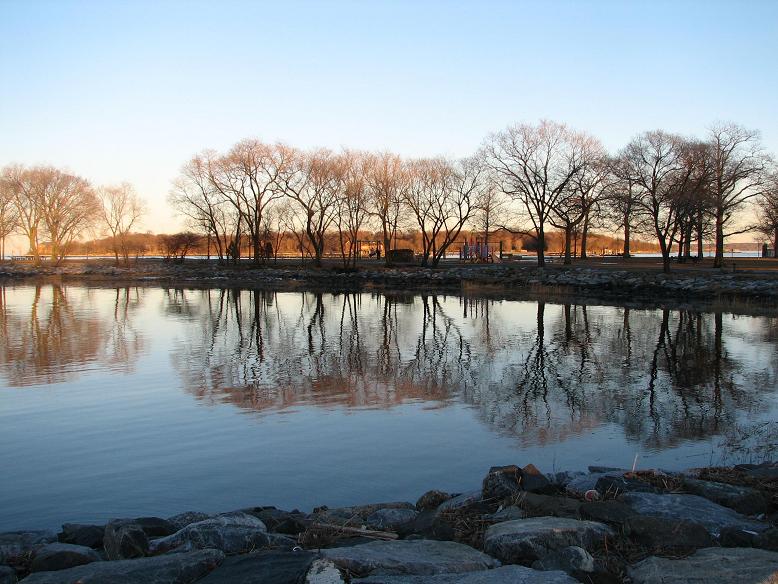 Orchard Beach and City Island lie along the shore further to the south-east toward New York, but watch the current carefully if you venture further than City Island lest you be caught in the currents at Hell's Gate at the mouth of the Sound.  To the east, you reach the Larchmont shore points.  The Sound itself is getting narrow by New Rochelle.  The currents tend to be slow here, so crossing to Sand's Point Long Island on a calm day is possible for experienced boaters.  The crossing from David's Island to Sand's Point is a little over two miles of open water.  You cross a major shipping channel on the other side of Execution Rocks, but by far the greatest danger is the pleasure boats that fill the Sound on any given summer day.  I prefer to go in the morning when things are quieter on the water.