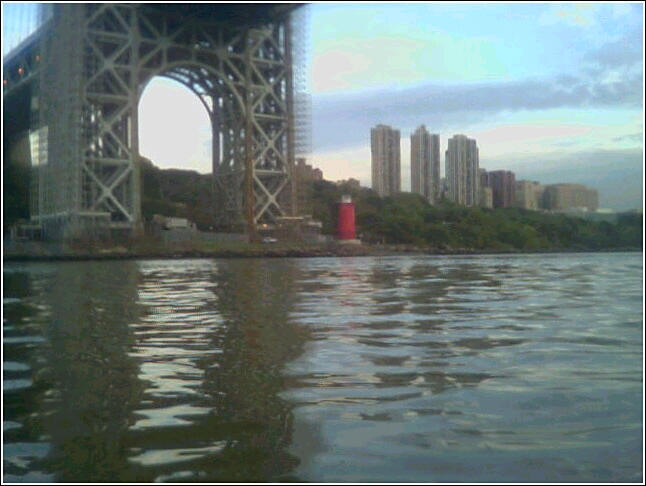 The Jefferies Hook Lighthouse, also known as the “Little Red Lighthouse,” came to fame in a children’s book called “The Little Red Lighthouse and the Great Gray Bridge,” written by Hildegarde H. Swift in 1942. The lighthouse was originally built 1880 and was placed in service in Sandy Hook, New Jersey.  It was dismantled, moved to its current location, and again placed into service in 1921.  It served for 26 years and was deactivated in 1947.  By that time, the George Washington Bridge was built right above it and its light no longer was needed by ships on the river. The lighthouse was scheduled to be dismantled and sold and was saved by fans of the now classic children's book. It is the only lighthouse on the island of Manhattan. It makes a natural point on the shoreline of the island (one of few left) that projects into the river. 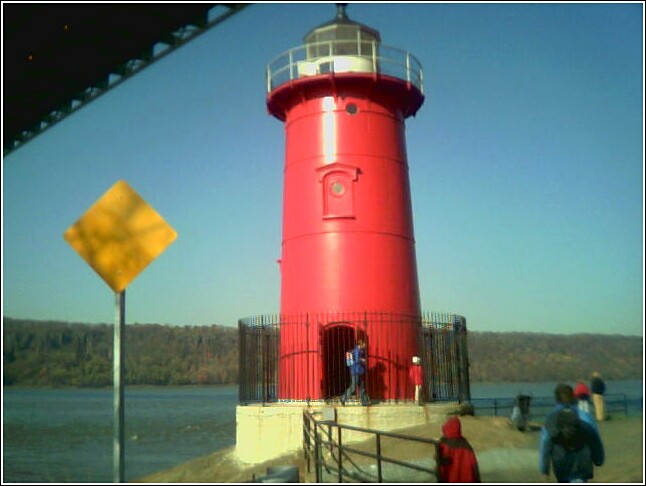 In this area, the river squeezes through a narrow section between two points, one on the New Jersey shore and one on Manhattan.  As the water squeezes through, the currents can be deceptively fast here, much faster than they are just half a mile up stream. Take care here.

The closest put-ins are the New York City boat ramps, or try the Ross Dock in New Jersey just to the north.

North takes you to the Ross Dock and Yonkers.

Kayakers in this area should be familiar with the cautions for New York City waters.

I set out from the Ross Dock to paddle to the Lighthouse for a late day paddle. The rains had flooded the watershed to the north and the currents were deceptively fast. The trip with the outgoing tide was quick, and I arrived in the Lighthouse area just 20 minutes after I set out. I remained more in the main part of the river than I would have a few years ago. After 9/11 the area by the bridge towers is closely guarded. I could see the police parked just behind the Lighthouse as I took photographs. My intention was to stay close to the shore just north of the bridge and take my photos from there.

As I worked the camera, I saw I was drifting much faster than I anticipated and was now right under the bridge and in a restricted area near the Manhattan bridge tower.  I quickly tried to make it back through the current to a cove just north of the bridge on the Manhattan side, but the current, combined with the flood waters from the north, was far too strong.

The next step was to ferry across to the New Jersey side. The shoreline there has several natural features and I hoped to find an eddy to surf back up-stream. I did. However, that meant staying close to the shore on the New Jersey side and the guards by the New Jersey bridge tower began to take notice of me. I made it through the bridge holding just inside of an eddy line, trying desperately to keep out of restricted water. I finally took shelter in a small cove just north of the bridge, while a helicopter circled overhead studying me closely. I’m not sure that the Department of Homeland Security understood much about the eddy I was trying to find or why I was circling the bridge. One thing was certain:  this had not been the relaxing trip I had envisioned when I set out that day.

If you choose to kayak this area, make sure that you keep the security in mind. Currents, even strong ones, are a part of any water sport. Under ordinary circumstances, the current I faced would not have been a problem. I could have pulled up on shore and waited a half hour for the current to slow down, or simply walked my boat up-stream to the cove I was trying to reach. However, the shore on both sides was restricted and was closely guarded by police. Kayaking near security zones changes the options you have to work with, and makes kayaking in New York a very different experience.