Some of the Native Americans who live along its shores call the Hudson River "Mahicanituck," or "the river that flows both ways."  It is tidal as far as Albany and it actually can flow in both directions as the tides come in and out.  An understanding of the currents and tides on this unique body of water is crucial to those of us who travel in small boats.

On the Hudson River, the tide comes in from the sea like a giant wave.  It moves up the river as far as Albany over the course of the day.  On one particular day, high tide at the Battery in lower Manhattan was at 5:45 AM.  The high tide rode up the river as follows:

By the time the high tide reached Albany, low tide had come through the battery, the G. W. Bridge and up as far as Haverstraw.  Low tide moves UP the river just like high tide does.  If you have trouble visualizing how low tide can move up the river, just remember that the trough between two ocean waves moves towards the shore just as fast as the peaks of those waves, even though the current in the trough pushes out towards the sea.  The low tide in the Hudson is just like the trough between two massive ocean waves.

Currents follow the wave of the tide.  As high tide moves in, the current gets stronger.  The incoming, or flood current, is strongest about 30 minutes before high tide.  After the wave comes through, the current CONTINUES UP STREAM for another 2 hours or so before slowing down and finally turning around.  The outgoing, or ebb current, is usually somewhat stronger and longer than the incoming (remember, the river water does reach the sea in the end).  It begins a few hours after high tide and peaks about 30 minutes or so before low tide.  IT CONTINUES FLOWING OUT EVEN AFTER THE TIDE HAS TURNED.  About 3 hours after low tide, the current turns around once again.  Take a look at the tide and currents for the George Washington Bridge on this same day:

At its maximum, the current moved at 2.44 knots.  This is almost 3 miles per hour.  A kayak that travels 4 miles in an hour can be severely affected by such a current.  Good planning is your best defense against being stuck fighting an unfightable current.  Check your tide charts before you leave and know what the current will do.  Make every effort to try to follow the current one way and then wait for the current to slow down or turn around before you return.  Above all, make good plans and then remember John Lennon's famous words: "life is what happens when you are busy making other plans."  In simple terms, we all get caught fighting a current now and again, and that is where a knowledge of eddies comes in handy.  An eddy is an area of current that forms behind an obstruction in which the current flows in the opposite direction from the main channel.   Eddies may form behind any obstruction.  If you stay close to shore, more often than not you ca

n use small obstructions to steer your way against even tough currents with far less effort than you would fighting the main current.

The line that separates the main current from the eddy is an important one to recognize in any body of water.  Knowing this small detail can help you find your way opposite most, but not all, currents in the Hudson River.  Fair warning:  as a general rule areas where the shoreline has been developed tend to have fewer natural points jutting out into the water and so have fewer eddies. 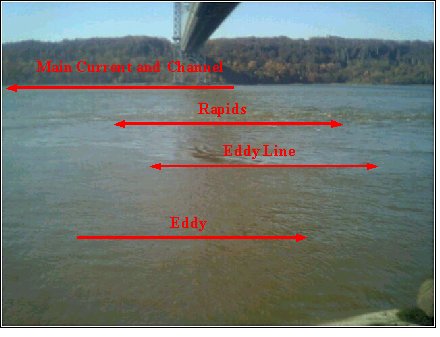